In an effort to stay authentic on the blog, I would like to share a DIY project that as my friend would say was ‘an epic fail.’   Not every project is smooth sailing during every stage.  Some have minor hiccups and some MAJOR.   I remember when I started this blog Martha Stewart was big (pre-prison big) and while I loved her craft projects I hated how perfectly things turned out and how perfectly things always went.   She would have never shown the glue gun stalling out mid project, and having to throw yourself in the car in yesterday’s yoga pants to run to out for more supplies like a crazy woman.  I like perfect (ok, I like perfect a lot) but I work hard on ‘good enough’, and often times ‘good enough’ turns out pretty damn well. This epic fail of a desk is my example of this.  I went straight off the rails to save this project, did some things I wasn’t proud of at the time, and yet in the end think it turned out pretty good.  Here’s the story…
The cottage is coming along.  But one piece that seemed to allude me was a very very tiny desk.  No matter where I am, from every apartment I have ever lived in, to visiting my parents, to staying in a hotel room I love a desk.  A little work space to sit down write out a to do list.  But as the large furniture pieces snagged up most of the spots, it got harder to fit one in.  The last place where I could envision one was around the corner from where the TV would be, on a very short wall that was part of the arched cutout. 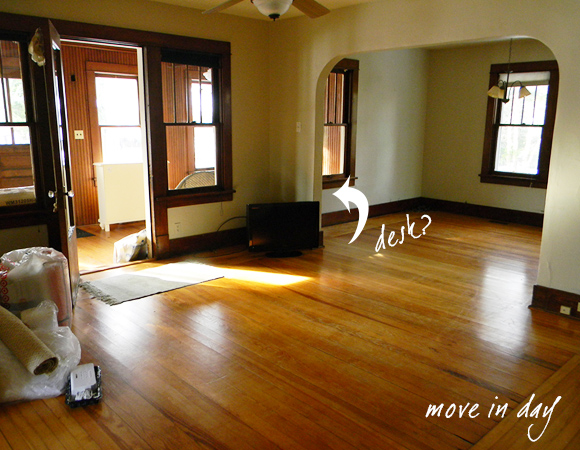 Rest assured there is no desk in this universe that is small enough to go there.  This was a TINY spot. I thought I measured it at 30 inches long.   I searched everywhere, considering everything, even a flip down desk like this one.  At one point I thought the Abbott Desk from Ballard would work (totally cute, and comes in white/powder blue!) until I re-measured my spot only to realize it was a hair LESS than 30inches.  Ugh.  So I finally starting Googling how to make a table.  How hard could it be?

The supplies portion was insanely easy.  Really all you needed was a flat piece of wood, four legs, and four plates. The best part was it turns out they sell ready to go legs at Home Depot with a screw coming out the top (mine were $9 each).   The guy in lumber cut me a table top just to the size I wanted (yes, he did ask me the measurements a few times thinking I had messed up – 12×28?). So far so good. Got home and painted it all white.   Next I drilled the plates into the bottom of the table top, and screwed the legs into them.  At this point, things were going so smoothly I was thinking Sweet Sanity might start selling tables. 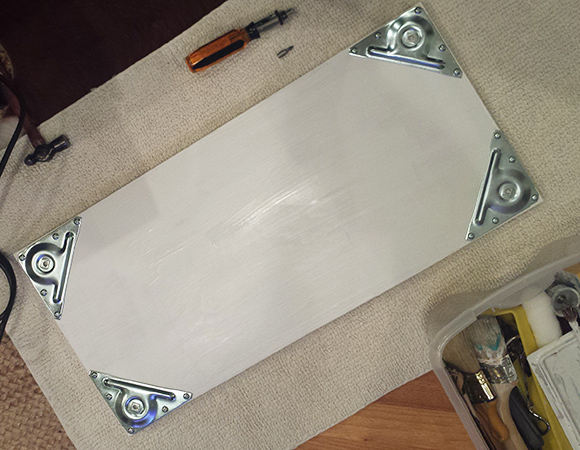 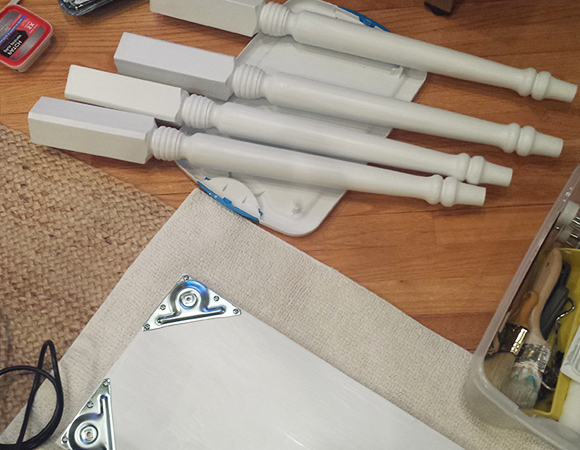 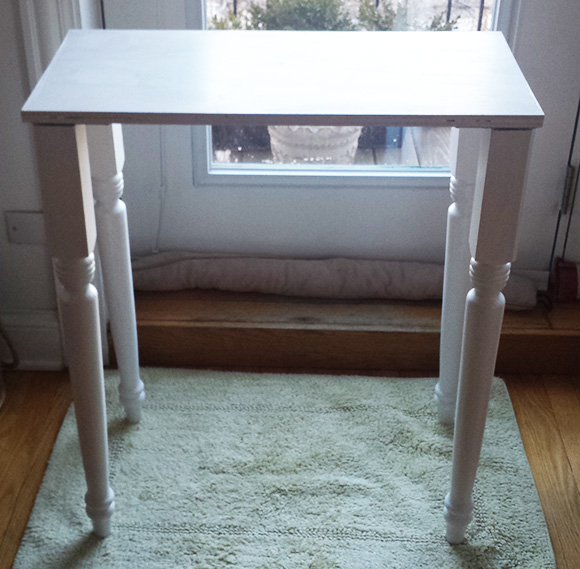 Let the Epic Fail moments commence…. EPIC FAIL MOMENT #1: The next day one of the legs seemed rather wobbly.  I tried to screw it in a little tighter whereupon it snapped off.  The screw actually slid right out of the table leg.  Crap.  No coming back from that. I abandoned that leg and tightened the others, only to have a second leg break off.   There are no photos of this.  That would be because a mental breakdown was occurring.

At this point I could have gone back to Home Depot and bought two new legs and repainted them. But it was 8pm and I was pissed.  So instead I decided to remove the silver plates and drill the legs straight in from the top.  The screws were going to show – yep. Lovely.  It was even more complicated because those legs were a little shorter once the plate was gone, so I had to use scrap wood wedgies to try to fill the gap.  Leveling table legs is pretty much impossible.

But finally she was standing.    The next order of business was a table ‘apron’ as they call it to hide the junk underneath. I had a genius idea to use molding for this.  Back to Home Depot, a strip of it cost less than $1. I needed to get those nice angle cuts only achieved with a miter saw, so again stood in line for the lumber guy.  He cut them beautifully.  IF I had measured correctly.  When I got home I realized it was too short.  EPIC FAIL MOMENT #2: Instead of heading back to HD for a re-cut, I split the piece down the middle so the far ends would still line up with the side piece angles, and shoved another spare piece of wood in the middle.   I consider this a low point in the project.  I was using wood filler like it was my job and appalled by my impatience and stubborness.

The Big Save:  After a good night’s sleep, followed by ridiculous amounts of wood filler, wood glue, and white paint, I decided that Grey Stripes make everything better.   Using some sample paint I had and a couple layers of polyacrylic top coat the mishaps became less and less noticeable.  The screws in particular were a little more hidden. 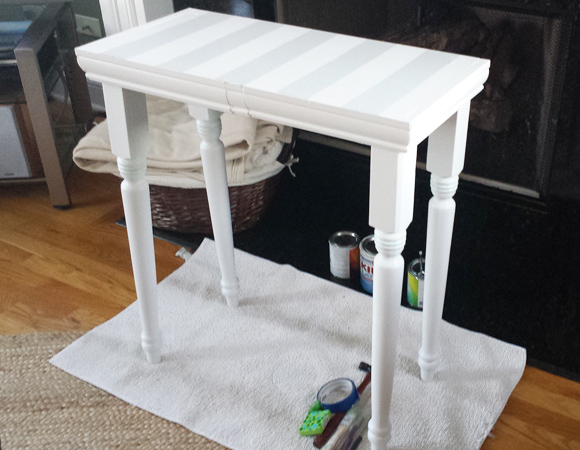 And once the ‘Baby Giraffe’ table was officially in its corner, and the pencil cup and binders strategically placed, I was truly happy I had not given up on her.  I doubt half the people passing by would notice the mistakes. But I did want to share the horrifying build process to let everyone know that meltdowns happen.  Stubborness and impatience happen.   But that’s ok, it just makes the saves that much better.  XOXO 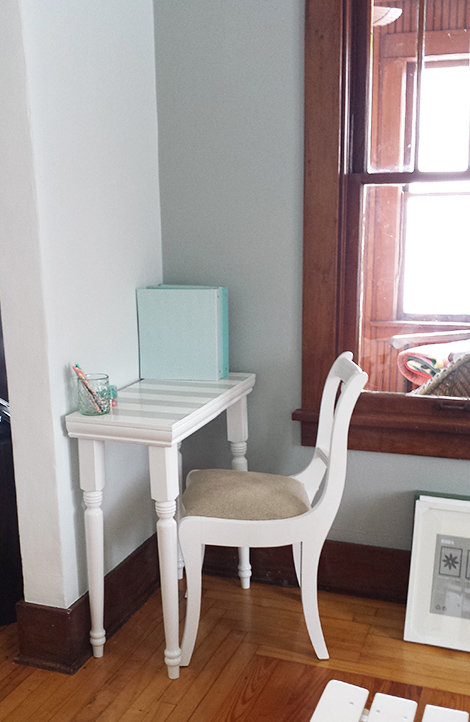 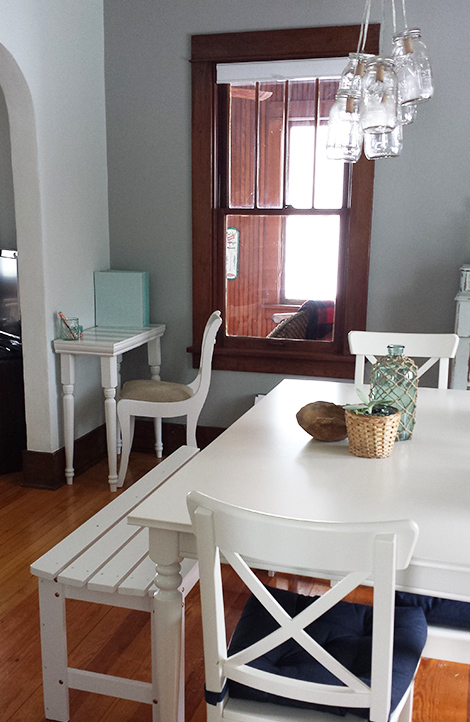 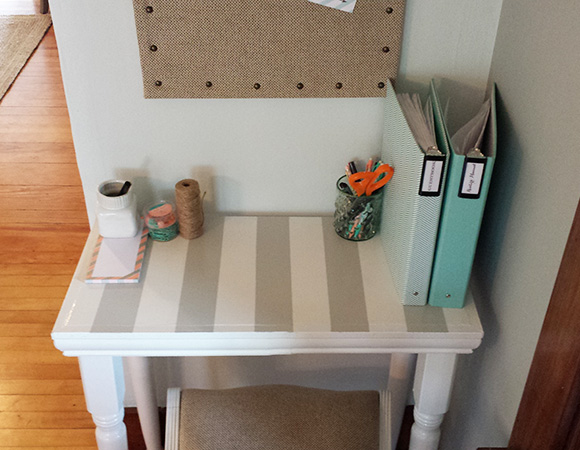 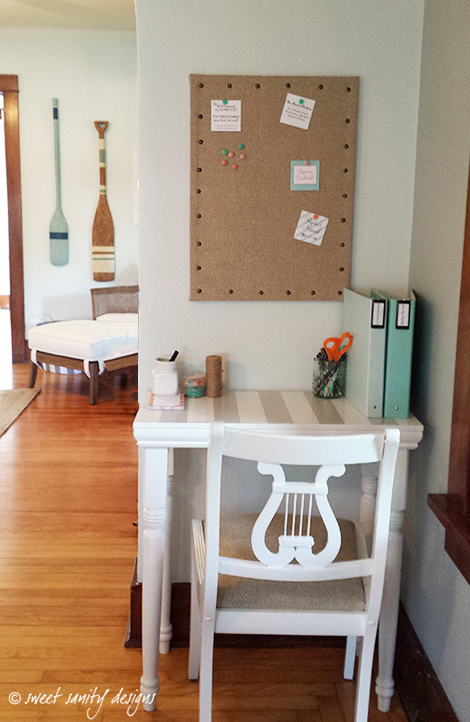